Game Rant received a behind the scenes look at ‘Assassin’s Creed Syndicate’ and we walked away thoroughly impressed by the setting and gameplay additions that were on display. 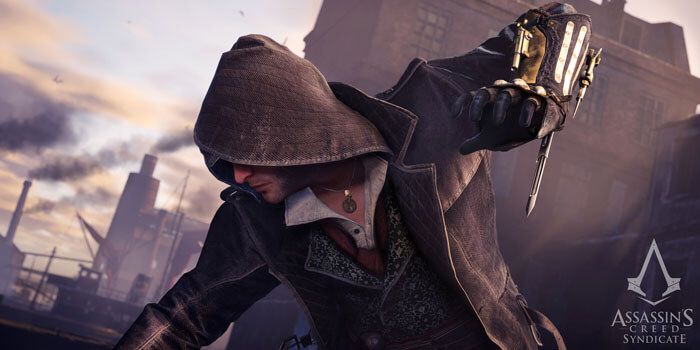 When people think of Ubisoft, they can’t help but think of Assassin’s Creed. The flagship gaming franchise has provided gamers with an annual installment year-over-year, but the end result of this rigorous development process is what lead to the bulk of the issues in last year’s Assassin’s Creed Unity. While still an enjoyable game at its core, the title was littered with bugs upon launch that made playing the title nearly impossible.

It’s for these reasons that Ubisoft has a lot more than the franchise’s future to look out for with its next entry – it has its very reputation on the line – and that’s where the newly announced Assassin’s Creed Syndicate comes in.

Game Rant was fortunate enough to visit Ubisoft’s Québec City studio to get a glimpse of the new game in action. Formerly codenamed Assassin’s Creed Victory, the newest Assassin’s title takes place in London, England in 1868. As history buffs will immediately point out, this was the exact time frame in which the peak of the Industrial Revolution was most prominent. As a result, there have been several major innovations made within the series.

Taking place around 75 years after the events of Assassin’s Creed Unity and the well-documented French Revolution, players will find themselves in a world in the midst of a major societal turning point. Historical, political, industrial, and technological advances all occurred during this prolific era, and the developers behind Syndicate have ensured that all of these changes have been captured in-game.

The most immediately apparent example of this is the “rope launcher” which can be used by the game’s central characters (yes, characters). During the gameplay demo we were shown, the developers had Jacob Frye scaling buildings in record time and even crafting zip lines with the newly implemented device. Best of all, every single building can be scaled utilizing the gadget, which ensures that quick getaways from hostile pursuers are always an option.

Meanwhile, the zip line aspect of the old school grappling hook will allow fans to drop down on unsuspecting guards and quickly bring about a gruesome end to their shift. The developers assured us that this grappling hook of sorts would be used purely for traversal though, which means that those hoping to replicate Mortal Kombat’s Scorpion and his patented “get over here” technique are out of luck.

If zipping around the rooftops of London like an old timey Spider-Man wasn’t enough, players can also take on the tried-and-true method of hijacking horse-drawn carriages. This is a lot less inconspicuous than attempted assassins may prefer, but this brings with it a lot more options as well. These mobile boxes allow players to battle on top of them or even jump from roof to roof in a high speed escape attempt. The implementation of “vehicles” adds a lot more depth to traversal, and the ability to go full Grand Theft Auto on a stagecoach is a novelty that likely won’t fade with repetition.

So while traversal is a major point of focus for Assassin’s Creed Syndicate, the story itself should also grab the attention of longtime fans. This time around there will be not one, but two main protagonists. As was previously rumored before, one of these assassins is Jacob Frye, while the other is his twin sister Evie Frye. These two are said to be trained by English outsiders seeking to overthrow the Templar foothold in the region.

As longtime followers have learned throughout the series, where there’s money there are sure to be Templars. Given the shift to a Capitalist society during the Industrial Revolution, it’s not difficult to assume that the greedy faction has established a stranglehold on a burgeoning city – which is exactly what they’ve done. With the assassins in ruins, it falls on Jacob and Evie to rally mistreated factory workers and thugs to overthrow their oppressors and bring about justice for the working man.

The setting, narrative, and new additions of Syndicate seem like they could be enough to avoid franchise fatigue and appeal to longtime followers of the series. With additions like the rope launcher and the ability to play as a male or female protagonist, it’s evident that Ubisoft is keen on evolving the franchise. It’s too soon to say if the next Assassin’s Creed will avoid the problems that Unity suffered from, but what we were shown of the game thus far is more than enough to have grabbed our attention where recent entries in the property have failed.

Assassin’s Creed Syndicate will be arriving for PC, PlayStation 4, and Xbox One on October 23, 2015.