Borderlands All The Best Easter Eggs In The Franchise

Borderlands: All The Best Easter Eggs In The Franchise

With players set to discover Borderlands 3 Easter eggs soon, here are some of the best hidden and secret moments from the franchise so far.

You Are Reading :Borderlands All The Best Easter Eggs In The Franchise

One thing the Borderlands franchise is known for, outside of the bajillions of wacky guns, is the writings ability to utilize humor and self-awareness. This was very evident in Borderlands 2 through the main villain Handsome Jack, who started off the game as a character who came off as smug, arrogant, and one to crack jokes most of the time.

The series has also had a penchant for hiding plenty of references and Easter eggs in plain sight, something which Borderlands 3 is likely going to continue when it launches in September. Before the highly anticipated next installment finally arrives, here are some of the best Easter eggs in the series.

Unlike the other games in the franchise, the very first Borderlands didn’t have too many Easter eggs for fans to discover. Many were fairly small like a hidden Claptrap who waves, but there was one that went unnoticed by fans for much longer than Gearbox Software anticipated. Known as Fun With Barrels, the developer provided a few clues to lead players to the exact spot to witness a fairly strange occurrence.

In Treacher’s Landing, players can find a hidden dock in the south east where the achievement ‘You’re On a Boat!’ is earned. While most thought this was the end of that secret dock, it was later discovered that while standing on the dock, players can shoot colored barrels in a specific order to trigger a bizarre and unexpected event. First, shoot the yellow barrel to the right of the dock, the green barrel in the distant trash pile east of the boat, any blue barrel on the boat, and then the red barrel floating in the water to the left of the boat. If done correctly, three pillars appear in the water, the song Snifty’s Loading by Raison Varner begins playing, and Patricia Tannis can be seen riding a huge fish in the water.

In the spinoff game Tales from the Borderlands, it was later revealed that the fish is called Splorghuld the Flesh-Slayer, has awful breath, and is 15 meters long.

The other noteworthy Easter egg was largely discovered by accident. Originally, the red chests were intended to be well hidden throughout the game, rather than in plain sight. The idea was eventually scrapped, though one seems to have slipped past the developer and remained for players to come across.

Known as a developer chest, players have noted that finding this chest on the first playthrough has generated stronger items than returning to it in a second or third go around. The chest is well hidden in Rust Commons West, under a large stone structure right at the very edge of the map. Players have to jump off of what appears to be the edge of the map, which then brings them to a hidden area under the stone structure where one red chest sits.

11 Mutated Turtles and a Rat – Borderlands 2

After the story mission, A Dam Fine Rescue is completed, players can speak to Patricia Tannis to take on an optional mission called Splinter Group. The mission tasks players with descending into the sewer system to kill four dangerous mutated escapees from Wildlife Exploitation Preserve. As the mission describes it, they’re well armed, color-coordinated, and love pizza.

Ultimately, the mission is a parody and reference to the Teenage Mutant Ninja Turtles. Here in the Borderlands, players are not actually fighting Turtles. Instead the player is taking on humanoid enemies part of the Rat faction. What’s special about these enemies is that like the actual TMNT, they use melee weapons, have a shell like item strapped to their back and are secretly led by a person known as Flinter. The four members are known as Dan, Lee, Mick, and Ralph, each of which dresses in a color that mirrors the Turtle they’re clearly based on.

Players visiting the Caustic Caverns may have run into a friendly NPC character and a camp fire. At closer glance, this area in the northeast section of the zone is a clear reference to Dark Souls and the bonfire system. White phantoms continually move and sit around the campfire, an obvious nod to what players experience at bonfire shrines within Dark Souls. The character sitting nearby is called Solitaire, another reference to Solaire of Astora, an NPC character who is better known for praising the sun.

9 Double Rainbow All The Way – Borderlands 2

While exploring the eastern side of the Highlands, players can come across a small tent near the Hyperion Base near the entrance to the Outwash. At the end of the base, players can find the tent below a cliff overlooking an expansive view of the sky. At this point, Handsome Jack or Claptrap come on the intercom to basically reenact the famous audio clip of a person reacting to seeing a double rainbow for the first time.

Players also earn an achievement for coming across this full on and perfect double rainbow.

Located in the Eridium Blight, players can face off against a particularly powerful bullymong called Donkey Mong. Unlike other bullymong enemies, this one is brown, has a barrel strapped to its back, and curiously wears a red tie. This boss enemy is a parody of Nintendo’s primate Donkey Kong, who has been in countless games over the years, but got his start in the arcades throwing barrels at the Mario-esque character, Jumpman.

If that wasn’t enough, defeating Donkey Mong unlocks the Definitely An Italian Plumber achievement. Nintendo is well known for protecting its IPs, so Gearbox apparently did enough to avoid the gaze of Nintendo’s stable of lawyers.

Speaking of Bullymongs, players can also come across King Mong, another reference to a completely different ape, King Kong.

It’s clear that Anthony Burch and the writing team at Gearbox had a lot of fun referencing characters and properties. For this latest one, the team targeted Disney and one of its many princesses, Snow White.

An optional boss located in The Fridge, Laney White joined the Rats faction to get away from Scooter and his unwanted advances. While Scooter hired the Vault Hunters to win her back, they soon discover that she has befriended seven dwarf minions. Unlike the Disney version, these seven are pretty hostile and have clearly led a tough life. Killing Sleazy, Dirty, Tipsy, Crabby, Bloody, Greedy and Creepy before Laney White unlocks a challenge and vice versa for taking out Laney White first. 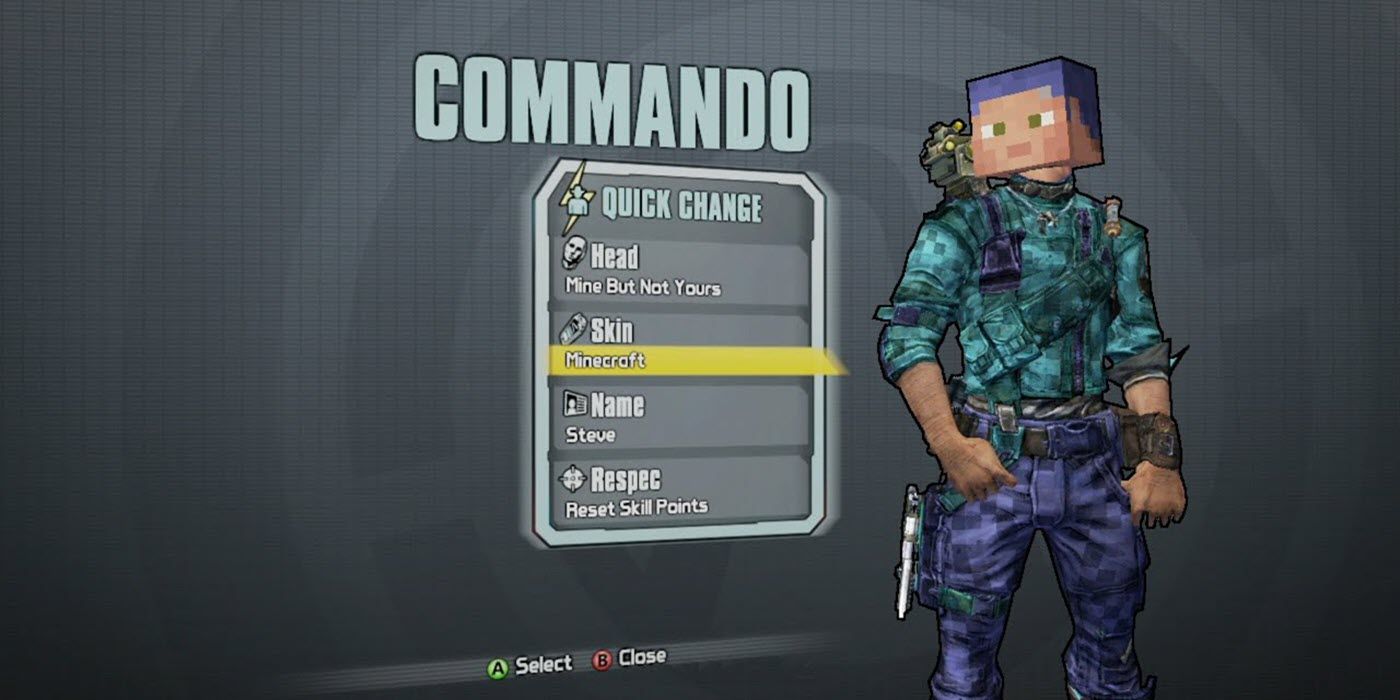 In addition to Dark Souls, the Caustic Caverns is also home to another reference. Over in the Western part of the map, players will come across two minecart tracks and a large closed hangar door. Immediately head right and jump down when two square blocks are seen. Turn around to find dirt that looks a lot like what players would expect to find in Minecraft. Punch the dirt to break it apart to open a new area. Continue smashing the bricks to find a near area with Minecraft creepers roaming around. Large badass creepers eventually appear and killing them actually unlocks new skin and head customization options for each of the four vault hunters.

While many Easter eggs have been intended to be comical or a parody of something else, this one is actually quite touching. Michael John Mamaril, a massive fan of the Borderlands franchise, unfortunately passed away at a young age. Gearbox Software decided to immortalize him within Borderlands 2 as an NPC that rewards players with loot when he’s found.

During the final mission of the game in Tycho’s Ribs, players enter a round room with several elevators. While taking most of the elevators will result in death, one in the southwestern side will take players up to a world that looks like it was constructed out of old 8 bit, pixelated blocks. The music even has a chiptune style to it, making this whole area feel like it was ripped from an off brand Super Mario NES game.

Defeat all of the enemies to make it to the final room filled with chests, loot, and a purple warp pipe. 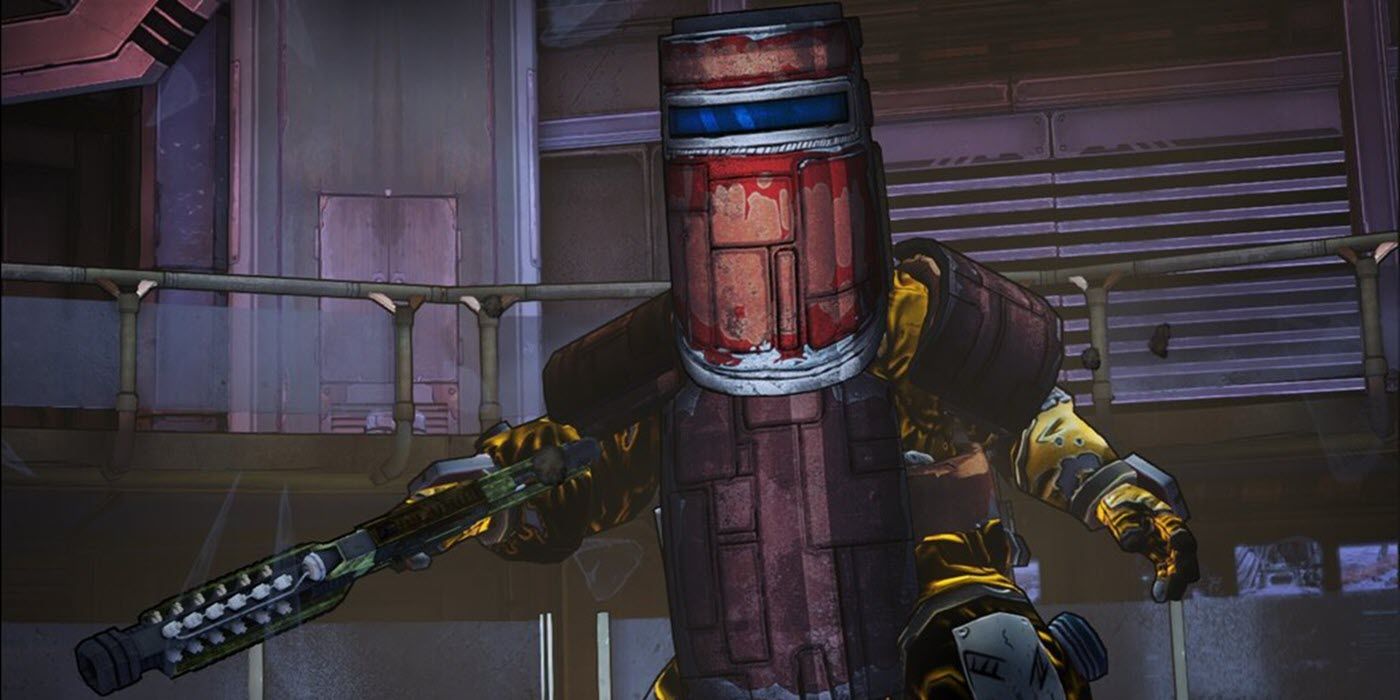 This Easter egg is actually two wrapped in one. In Crisis Scar, the boss character Red Belly are a pair of Scav Leaders wearing a full sized armor set to appear as one. What’s interesting is that the armor the duo is wearing is inspired by what the real 19th century Australian outlaw Ned Kelly wore. Players can also come across an ECHO log of the duo discussing the missing leg armor, which reference’s how Ned Kelly was caught after taking two shotgun blasts to the knees.

The term Red Belly is also a reference to the Red-bellied black snake, which can be found in Australia. Not only that, this boss character has a chance at dropping the unique SMG, Black Snake.

2 Through Space and Time – Borderlands: The Pre-Sequel

Starting off in Triton Flats, players should head to the east and take the map exit point to Stanton’s Liver for this movie reference. Near the entrance, players can find a somewhat hidden path up a mountain towards a cave zone called The Ventricles. Continue heading to the back of the cave and jump up on a ledge to a hidden scientific area of the map.

In Higgins’ Gully, players will come across a purple monolith that looks like it was taken straight from 2001: A Space Odyssey. Walking through the monolith produces some trippy effects and dumps players into Piraud’s Thrutch, an area with another purple monolith. Walking through that one puts players into a small metal room with portraits, ticking clocks, and a red chest. Walk through the monolith one more time to see some sort of space baby image before heading back to Higgins’ Gully.

1 Dark Side of the Moon – Borderlands: The Pre-Sequel

Taking place on Pandora’s moon Elpis, this gave the developers at 2K Australia the perfect opportunity to add a Pink Floyd reference to Borderlands: The Pre-Sequel. Early int he game, players will not only square off against an enemy faction known as the Darksiders, but also come across a number of prisms with colored lights shooting out of them, a clear nod to Pink FLoyd’s Dark Side of the Moon album.

Borderlands 3 launches on September 13 for PC, PS4, and Xbox One, with a Stadia version also in development.