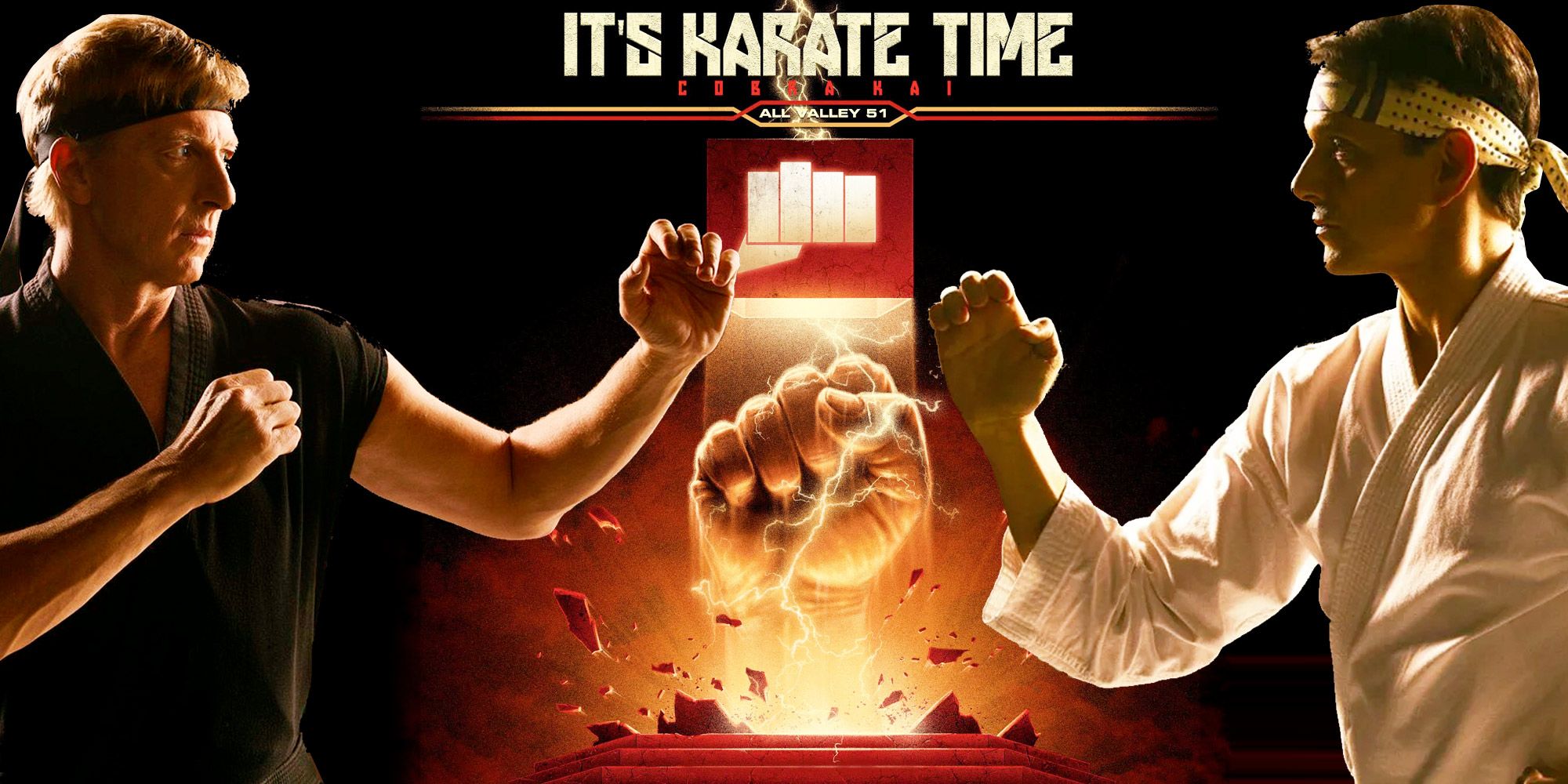 Screen Rant has an exclusive first listen to a new track from Cobra Kai season 4, as well as an interview with the composers of the show. Cobra Kai is the continuation of The Karate Kid saga that began with the first film, released in 1984. Directed by John G. Avildsen and written by Robert Mark Kamen, the story follows a teenager named Daniel LaRusso (played by Ralph Macchio) who moves from New Jersey to California, where he struggles to fit in, attracting trouble from a local karate dojo called Cobra Kai. The star student of the dojo, Johnny Lawrence (played by William Zabka), and his cohorts begin bullying LaRusso, who eventually finds help in Mr. Miyagi (Noriyuki “Pat” Morita) a handyman who also happens to be a classically trained martial artist. Miyagi agrees to train LaRusso to face off with Lawrence and the Cobra Kai dojo, setting off a chain of events that would reverberate all the way to the current season of the show.

Cobra Kai picks up three decades after the last film in the series, The Karate Kid: Part III, which finds a grown-up LaRusso and Lawrence once again at odds, as they both run competing dojo’s, Cobra Kai and Miyagi-Do, now with their students starting their own rivalries. Adding LaRusso and Lawrence’s offspring into the mix, as well as old friends and enemies from the film series, and Cobra Kai has more than enough to capture the spirit of the original films while bringing the story to a whole new generation. The drama, action, and humor are on full display with the show, which is enhanced greatly by the music that accompanies it.

Screen Rant spoke with composers Leo Birenberg and Zach Robinson, who have been composing music for Cobra Kai since season one. In addition to the interview, Screen Rant has the exclusive first listen to the first track released from Cobra Kai season 4, entitled “It’s Karate Time”, which is a fitting blend of nostalgia with rock, synth, and thematic overtures that feel like a genuine karate opus. With the All Valley Karate Tournament playing a key role this season, there’s a good chance that this track could have a good home there. Listen to “It’s Karate Time” right HERE and check out the exclusive interview with Birenberg and Robinson below, where they discuss making music for the show, becoming massive fans while composing, and how they prepare from season-to-season, including the recently completed Cobra Kai season 5.

Both Birenberg and Robinson have composed music for a vast array of projects, including Hulu’s Pen15, Die Hart, Central Park, Jurassic Park: Camp Cretaceous, and more. The original composer of The Karate Kid series was the legendary Bill Conti, who won an Oscar for his score to The Right Stuff and is perhaps best known for creating the Rocky theme. Conti’s original work on The Karate Kid saga continues to be played in the show itself and many of the themes are worked into Birenberg and Robinson’s compositions from season to season of Cobra Kai.

Cobra Kai season 4 promises a lot of drama and action, and the music plays a key role. The series has constantly harkened back to the 80s and 90s era in terms of songs to complement the characters and setting while providing a well-balanced score to play to the scenes that need it. Music was a tremendous part of The Karate Kid series, be it from the Conti score or the songs used throughout, which became part of its identity over time. As important as the action and drama can be, it’s made all the better with fitting music, a tradition the showrunners and composers of Cobra Kai are carrying on with pride. Cobra Kai season 4 debuts on New Year’s Eve. The “It’s Karate Time” single will be available starting Friday 12/17 and the full soundtrack will be available on 1/7.